These sweet and tangy Raspberry White Chocolate Cheesecake Bars have a chocolate graham cracker crust and are much quicker to bake than a standard cheesecake. Plus, no water bath needed!

If you love cheesecake as much as I do, you're going to want to make these Raspberry White Chocolate Cheesecake Bars ASAP! The soft cheesecake layer has a touch of silky sweet from the white chocolate, and an extra punch of tang from the sour cream. The raspberry flavor also comes through so nicely (especially with the fresh berries on top), and it finishes with the rich and crunchy chocolate graham cracker base.

Cheesecake bars are great because it's basically the same as a normal cheesecake, with far less fuss and fewer ingredients needed. And BONUS, they are easy to transport and can be picked up with your hands. Finally, these freeze exceptionally well, so you can take out a square whenever that craving hits 😉.

This is the first step you want to take in the process, as the raspberry sauce will need time to fully cool before swirling into the cheesecake layer. Add the raspberries, sugar and splash of water to a small saucepan and turn it to medium heat. Use a spatula or wooden spoon to stir and break down the raspberries. It will create a rather jammy looking consistency and will be bubbling.

Pass the raspberry sauce through a fine mesh sieve into a bowl and then allow it to cool completely. I like to stir mine every once in a while to help the process along. Once cool, transfer to a piping bag or ziplock bag before making the swirls.

Transfer the crumbs to a bowl and mix in the sugar and salt. Next, drizzle in the melted butter and mix it together with a fork until the crumbs are completely moistened and it holds together when smashed down.

Prepare an 8x8" square pan with parchment paper slings and spread the crumbs around evenly. Then, compact it down. I like to use both an offset spatula and a ⅓ dry measuring cup to get it really compact. The bottom of a drinking glass (if flat) also works great.

Bake the crust in a 350℉ preheated oven for 8 minutes, then place it on a wire rack to cool completely.

Start by preparing a double boiler to melt the white chocolate. Add 1 inch of water in a saucepan and place a bowl over top. The bottom of the bowl should not touch the water. Turn the burner on to medium heat and add the chopped chocolate to the bowl. Stir it occasionally until the chocolate is completely melted and no chunks remain. Remove the bowl and allow the chocolate to cool a bit.

Mix the cream cheese on low until it becomes smooth. With the mixer running, add the sugar and mix until combined. At this point, scrape down the sides (don't skip this). Next, add the beaten eggs in a steady drizzle with the mixer on low, and add the vanilla. Scrape down the sides one more time (don't skip this), then continue mixing on low until the eggs are completely incorporated.

Finally, using a rubber spatula, fold in the sour cream until no streaks remain, then fold in the melted white chocolate until completely incorporated.

Pour the cheesecake batter over the cooled crust and smooth it out.

How to make the raspberry swirl

Use the tip of a butter knife to swirl the raspberry sauce into the cheesecake until the desired pattern is created. Sprinkle fresh raspberries evenly over the top, then bake at 350℉ for about 45 minutes until done.

The edges will be set and slightly puffy, and the center will have a jiggle to it, but should not be sloshy. Place the bars on a wire rack to cool for one hour, then transfer to the fridge to chill and firm up for at least 4 hours, uncovered.

Can these be frozen?

YES! Cool, cut, and slice the bars, then freeze them flat in a ziplock bag for up to 3 months. When you want to enjoy a slice, transfer it to the fridge for an hour or two, or allow it to sit out at room temperature for about 20 minutes.

What type of white chocolate should be used?

For all tests of this recipe, I used a Ghiradelli white chocolate bar. It's easy to find, melts easily, and combines nicely. White chocolate chips have stabilizers and may not melt or combine in to the cheesecake as well.

Can I omit the white chocolate?

Yes, definitely. Follow all the same instructions, just leave out the white chocolate.

Do I need to use a water bath?

Not for this recipe! While you may get a small amount of separation around some areas of the raspberry swirls, they are minimal and most get cut through when slicing, anyway. 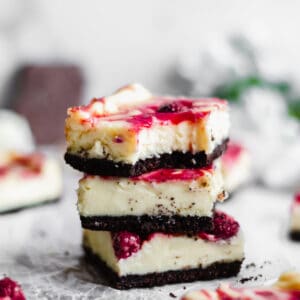 *1 cup of ground graham crackers is equivalent to one sleeve, or 9 crackers (in the U.S.) Store the bars in the fridge for up to 5 days. See post for freezing instructions.