You know what I love about galettes? They're made to be rustic and no fuss! Forget the pans, trimming, and crimping. All you need is a rolling pin (or a wine bottle will do 😜) and baking pan.

What makes this specific galette a bit more special is the addition of the frangipane. It adds some awesome flavor and texture and is such a natural pairing for peaches (and stone fruit in general).

Also known as almond cream, frangipane consists of finely ground almonds, a touch of all-purpose flour, softened butter, powdered sugar, and egg. I add both vanilla and almond extracts to really bring out the flavor of the almonds and peaches.

Frangipane (which sounds very fancy), is a simple filling that you truly can't mess up. It's a French-derived filling that is used is many pastries (think galette des rois, croissants, etc.) and cakes.

Pre-baked, frangipane is thick, soft, spreadable, and rather textured from the almond flour. After baking, it turns into a soft, cakey texture and tastes and smells of the almond extract. It provides an extra blanket of texture to this galette and soaks up the peach juices!

What is the difference between a galette, tart, and pie?

The major differences between these is the type of pan used (or lack thereof).

Start by making the pie crust. Plan ahead for this so the dough has time to hydrate in the fridge for about 2 hours prior to rolling out. Head over to my All-Butter Pie Crust post for very detailed instructions (with photos) on how to make and roll out the dough.

Preheat the oven and add a slice of parchment paper to your largest baking sheet. Right before you're ready to roll out the dough, mix together the ingredients for the frangipane with a wooden spoon or rubber spatula.

You'll also want to wash and slice all of your peaches (try to find free stone peaches - see more on this below in the FAQs). I like to slice mine about ½" thick so they keep a nice structure during baking.

I keep the skin on the peaches, but if you'd like to remove the skin, see the FAQ at the bottom of the post.

Once you prep the frangipane and peaches, roll out the dough to about ⅛" thick. Spread on the frangipane, leaving about 2-3 inches the whole way around, then pile the peaches onto the frangipane. You want to keep them mounded at the top.

Fold the dough up around the peaches (in roughly 3-inch sections) and press on the dough slightly. Whisk an egg and then brush the dough with the egg wash.

I like to gently lift the pleats and add a dab of egg wash into the folds to help the crust hold its shape. Finally, sprinkle the entire galette with sliced almonds and coarse Demerara or turbinado sugar.

Lastly, bake the galette in the center of the oven for 45-55 minutes until the pastry is golden brown, the peaches are bubbling, and any exposed bits of frangipane appear to be set.

Brush on some warm peach or apricot jam for extra flavor and sheen. Slice the galette and serve warm with vanilla ice cream!

P.s. Like this blue Cloud Linen? Head over to Loyale Studio to check out their beautiful selection of ethically and sustainably sourced linens!

Can I use canned or frozen peaches?

You can use frozen peaches, but I would not suggest using canned as they are too soft and will turn to total mush during the baking process.

If you'd like to use frozen peaches, thaw the peaches in a colander and then continue with the recipe instructions as directed.

Do I have to make my the homemade dough?

Definitely not. You can absolutely use store bought dough to make this Peach Frangipane Galette.

I prefer to use my All-Butter Pie Crust because it provides way more flavor and flakiness than a store bought dough.

How do I remove the peach skins?

If you'd like to remove the peach skins, cut a small X in the bottom of each peach and prepare a large pot of boiling water.

Drop the peaches into the hot water for 1 minute, then remove and run them under cold water (or drop them into an ice bath). Use a knife or your fingers to pull the skin off of the peach.

Should I use freestone or clingstone peaches?

If you can find freestone peaches, use those! Freestone means the flesh removes itself easily from the stone so you can cut in half and remove the pit without issue.

In clingstone peaches, the flesh "clings" to the pit, making it nearly impossible to cleanly separate the peach from the pit.

If you can only find clingstone, simply cut the flesh off of the pit on each side (making 4 cuts) and then slice. If you try to separate the peach in halves, you'll end up with a squashy mess.

Clingstone peaches are typically available from May to early June, and freestone peaches can be found from mid-June to mid-August. 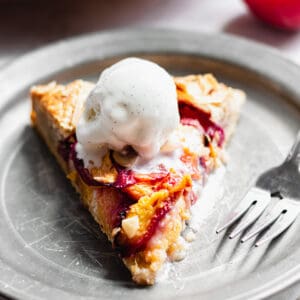 Store the tart at room temperature for up to 3 days.