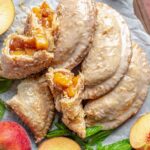 Homemade fried peach pies bring all of the flavor and nostalgia to your home kitchen. Fresh peaches doused in warm spices get folded into flaky pie crust, deep fried, and covered in a cinnamon glaze. They're the peach hand pies of dreams and will leave you going back for bite after bite!

Flavor & texture - the peaches get cooked down with brown sugar and warm spices, which extracts the peach juices and intensifies the fresh peach flavor! They're SO comforting.

The homemade pie crust becomes so flaky and perfect after frying and stays slightly soft on the inside from the moisture of the peach pie filling. It's crispy, doughy, and so incredibly delicious. The cinnamon glaze also encases the pie dough for the slightest extra bit of texture, which I love!

Simple - I love that these are made as handheld pies rather than made in a pie dish. It makes it quite simple to assemble and then everyone can have their own individual pie, which I think is really special!

Make ahead - these peach hand pies can be assembled and frozen so you can easily remove a few to fry up and glaze when the craving hits! It's such a great option for a last-minute gathering or if you need to provide a housewarming or hostess gift.

If you love peaches, don't forget to check out my Peach Frangipane Galette and Brown Butter Peach Crisp!

A traditional southern fried peach pie recipe uses dried fruit and a dough that is akin to biscuit dough. Back in the day, this was easy to make with ingredients readily available, and dried fruit was always preserved to extend shelf life throughout the year. The dried peaches would then get rehydrated with sugar, spices, and thickeners and then broken down with a potato masher to make the peach pie filling.

While many southern recipes will go this route, I chose to make the recipe with homemade pie dough and fresh peaches, as I love that texture best. You can read about more variations of the recipe in the blog post.

The ingredients list for these handheld pies is relatively minimal:

If you can find freestone peaches, use those! Freestone means the flesh removes itself easily from the stone so you can cut it in half and remove the pit without issue.

In clingstone peaches, the flesh "clings" to the pit, making it nearly impossible to cleanly separate the peach from the pit. If you can only find clingstone, simply cut the flesh off of the pit on each side (making 4 cuts) and then slice. If you try to separate the peach in halves, you'll end up with a squashy mess.

Clingstone peaches are typically available from May to early June, and freestone peaches can be found from mid-June to mid-August. Note that these typically aren't labeled in grocery stores, so you'll want to go by month of purchase or ask a grocery attendant.

How to Peel Peaches for Pie

There are two ways that you can peel your peaches, but it's dependent on the ripeness of the stone fruit. If the peaches are relatively firm and the flesh has not started to soften, you can simply peel them with a vegetable peeler.

Once the flesh has ripened and started to become soft, they are no longer able to be peeled with a vegetable peeler. Instead, cut an X in the bottom skin of each peach, drop them in boiling water for 1 minute, then transfer them to an ice bath. Then, the skins will peel right off!

Here are a few substitutions that can be made for the fried peach pies:

Note it's best to make the pie crust and peach pie filling a day in advance, or at least up to two hours prior to assembly.

One: Peel and chop the peaches into 1cm pieces, then combine peaches in a large skillet with the spices and sugar.

Two: Cook the peaches until the juices release, then mix the cornstarch with cold water and stir it into the peach pie filling until it thickens. Cool completely.

Three: Take the rested pie dough and roll it out on a floured work surface until it's about ⅛ inch thick.

Four: Cut out six-inch rounds using a bowl or another round object and the tip of a paring knife and transfer them to a large baking sheet lined with parchment paper.

Hot tip! Take the dough scraps and layer them on top of each other, then roll it out again to get more rounds. Continue until you have 6 rounds of dough.

Five: Add a scoop of peach pie filling to the center of each dough circle and gently lift the sides to start pressing the dough together into a half-moon shape.

Six: Pick up the half circle and pinch the edges together for the first seal.

Seven: Place it back on the counter and use your fingers to push down on the edges and create a tight seal.

Eight: Use the tines of a fork to press the edges of hand pies together for the final seal.

Hot tip! Have your oil frying station set up with paper towels, a wire rack or sheet pan, and a spider or slotted spoon next to it so everything is ready to go.

Nine: Fry the peach pies 1-3 at a time in hot oil until golden brown, then transfer to a wire rack or paper towel to cool.

Ten: Once cool, mix together the glaze, coat each fried peach pie completely, then remove to a wire rack to set. Then, enjoy!

Why is my fried peach pie soggy?

This is likely because the oil temperature was not hot enough prior to adding the dough. Alternatively, it could also mean the pies were not fried for long enough and the inside layer of the dough did not cook completely.

To fix this, add the fried pies (with no glaze) to a sheet pan and bake for an additional 10 minutes or so in a preheated 350℉ oven.

Which peach is best for pie?

I love a standard yellow peach for peach pie (free-stone if you can find it). However, you can absolutely use a white peach or even nectarines! Donut peaches can also be used, but you'll need more of them because they are smaller.

Can you freeze fried peach pies?

Yes! I recommend freezing the assembled and pre-fried dough. To do this, flash freeze the assembled hand pies on a cookie sheet for 30 minutes, then transfer to a zip-top bag and freeze them for up to three months. Fry directly from frozen.


You can also freeze the pies after frying, but only prior to adding the glaze. Allow the fried pies to cool completely, then place in a zip-top bag or sealed container and freeze for two to three months.

Store the fried pies for 2-3 days at room temperature, uncovered and not touching. The pies store best prior to adding the glaze, as it can make them a bit soggy.

The pre-fried pies can be flash frozen for 30 minutes, then placed in an airtight container and frozen for up to three months. Fry directly from frozen.

How to Reheat Fried Peach Pies

Reheat the pre-glazed fried hand pies in a 350℉/180℃ oven for 10 minutes until hot. Allow the pies to cool, then glaze. Alternatively, reheat them in an air fryer at the same temperature for about 5-7 minutes, then cool and glaze. 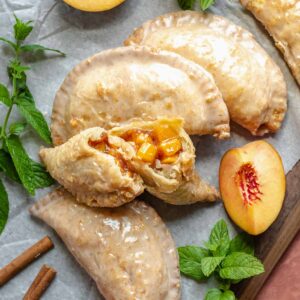