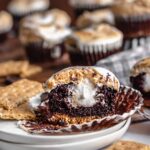 These S'mores Cupcakes are made with moist chocolate cupcakes on top of a crunchy graham cracker crust that gets filled with marshmallow fluff and topped with a toasted marshmallow graham cracker frosting! We're taking the best part of summer and turning it into a cupcake!

Texture - these s'mores cupcakes have so many textures going on! Graham crackers in the base for crunch, delicious chocolate cupcakes, gooey marshmallow creme filling, and super fluffy frosting. What's not to love here?!

Filling - the homemade s'mores cupcakes have marshmallow fluff or marshmallow creme in the center of the cupcakes for extra marshmallow flavor! We love a cupcake-filling surprise! See the variations section for more ideas on how to fill your cupcakes.

Frosting - the top of the cupcake gets topped with a fluffy marshmallow frosting that's swirled together with a flavorful graham cracker buttercream! Use a kitchen torch to carefully torch the marshmallow part of the frosting, if desired.

Don't want to go for cupcakes? Try my S'mores Bars recipe and get that s'mores craving in a different form! Or, if you're just here for the marshmallow, try these:

Note that it's important for all dairy ingredients to be at room temperature before starting this recipe. Note that this recipe is made by hand in a large bowl or two, so an electric mixer is not necessary!

See the recipe card for the full list of ingredients and quantities.

Here are a few ways you can mix up the s'mores cupcakes to suit your taste:

How to Make S'mores Cupcakes

Two: Whisk together the dry ingredients and wet ingredients in separate bowls, then add the wet to the dry and stir.

Three: Add hot coffee or hot water to the batter and stir to combine.

Four: Divide batter into each cupcake liner until ⅔ of the way full, then bake.

Five: Create the well in the center of each cooled cupcake.

Six: Fill each cupcake with marshmallow fluff - this is best done with a piping bag.

Seven: Soak the graham crackers to soften, then add it to the creamed butter and sugar.

Eight: Add additional heavy cream and beat until the graham cracker frosting is light and fluffy.

Nine: Make the graham cracker buttercream, then add the buttercream and marshmallow fluff to a sheet of plastic wrap, roll it up, and add it to a piping bag.

Ten: Pipe the swirled buttercream on top of each cupcake. Carefully toast the marshmallow portion only using a kitchen torch (optional).

Hot tip! Use a 3:1 ratio of graham cracker buttercream to marshmallow fluff. Adding too much fluff will have the frosting running off of the sides of the s'mores cupcakes.

What is the secret to super moist cupcakes?

Sugar, fat, and enough liquid! This is the holy trinity for producing ultra moist cupcakes.

How do you make cupcakes light and fluffy?

Over-mixing batter can cause the gluten to develop in a more significant way, leading to tough baked goods. In order to produce a light and fluffy cupcake, be sure not to over-mix the batter and only mix and fold until all ingredients are incorporated.

What if I don't have a kitchen torch?

If you don't have a torch, you will need to skip out on toasting the marshmallow portion. The graham cracker buttercream will not hold up to broiling in the oven and needs to be in a very specific, small area to toast.

Do I have to use dutch processed cocoa powder?

For this recipe, you can use natural cocoa powder if that's all you have. I highly recommend using dutch-processed and it can be found in most grocery stores under Hershey's Special Dark Cocoa.

To freeze the cupcakes, wrap each cupcake (prior to filling and frosting) in plastic wrap then place them in a zip-top bag and freeze for two months. Remove the cupcakes, unwrap them, and thaw at room temperature. Then, continue with the recipe steps to fill and frost the cupcakes. 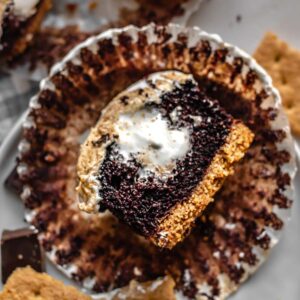 St0re the cupcakes in an airtight container at room temperature for one day, then covered in the fridge for an additional three days.  If you don't have a piping bag, I would recommend doing graham cracker frosting only rather than adding the swirl.  The cupcakes (prior to filling and frosting) can be tightly covered and frozen for two months. Thaw completely before adding the filling and frosting.