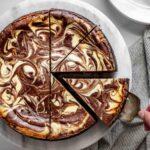 This chocolate marble cheesecake is made with a combination of vanilla and chocolate batter - with a bit of sour cream for extra tanginess - and swirled together to create a marble effect.

Nestled into a crust made of Oreo cookies, this chocolate swirl cheesecake is super creamy, dense, and has the best of both worlds. It's quite an impressive dessert that is sure to please a crowd.

This is a total showstopper recipe, that doesn't require too much effort (although a bit of time). This chocolate marble cheesecake would be perfect for birthdays, and even better for Valentine's Day!

Texture: This is a dense, yet creamy baked New York-style cheesecake, most akin to a traditional cheesecake. It's got that crunchy chocolate crumb crust that contrasts perfectly with the filling.

Flavor: This cheesecake has the best of both worlds - chocolate cheesecake and vanilla cheesecake! A classic vanilla flavor mixed with a rich chocolate flavored batter, and neither one is too overpowering. I chose to go with a chocolate crust to bring home the dark chocolate flavor, which I think compliments the bake best.

No traditional water bath: if you're a big lover of cheesecake making, you probably know how much of a pain it is to wrap your springform pan and pray to the Gods that the water bath doesn't leak through to your precious baked good!

Luckily, I've found a method that eliminates that step, which is to put a pan of boiling water in the bottom of the oven. This helps to create enough steam and moisture to replicate a true water bath! Ta da!

This recipe uses the basic cheesecake recipe from my Caramel Pecan Cheesecake, which is a perfect vanilla cheesecake base. It's also used in my Mini Strawberry Cheesecake Cups and Mini Speculoos Cheesecake.

The ingredients for the chocolate marble cheesecake are quite simple, most of which you likely already have as a pantry staple.

Here's a few ways you can mix up the chocolate marble cheesecake to make it your own.

One: Pulverize the Oreos in a food processor to a fine crumb, then mix with the butter and salt. Press the crumbs halfway up the sides of the pan, then bake to set and cool.

Two: Mix the cream cheese to break it down, then add the sugar and cornstarch and mix again.

Hot tip! Be patient when mixing the cheesecake batter. Everything should be done on the lowest speed for the smoothest batter. Beating too much air into the cheesecake can cause it to crack. Low and slow will produce the best results.

Three: Whisk together the eggs, then add them into the cream cheese mixture in four batches to slowly incorporate.

Four: Fold in the sour cream by hand until no streaks remain.

Five: Separate the cheesecake batter into two separate bowls, then add melted chocolate into half of the batter.

Six: Use a rubber spatula to fold the chocolate into the batter until no vanilla streaks remain.

Seven: Add the vanilla mixture and chocolate mixture to the crust in scoops, trying to alternate mixtures for best distribution. Gently tap and wiggle the mixture to settle it into the crust.

Eight: Use a table knife to swirl the batter together, getting down the whole way to the crust (without piercing through it). Then bake, adding a roasting pan of hot water to the bottom of the oven to act as the water bath.

Bake the cheesecake, then turn the heat off and crack the oven door for one hour before transferring to the fridge. Do not cover the cheesecake in plastic wrap, simply add it to the fridge completely uncovered to chill for eight hours.

Which cream cheese is best for cheesecake?

Philadelphia brand, full-fat brick cream cheese is hands down the most superior type of cream cheese for cheesecakes. It's thick, creamy, and fluffy. Some other brands of cream cheese can be very dense and have more of a sour cream flavor, which produces stogy baked goods.

Is a water bath required for cheesecake?

Technically no, but you should really use one. The moisture created keeps the cheesecake super moist and creamy, and also helps to produce an even bake. Cheesecakes baked without a water bath are also more prone to cracking.

Why did my cheesecake crack?

This can be for a few reasons: too much air was whipped into the batter, the oven temperature was too high, the oven door was slammed at some point, or the cheesecake was removed from the oven right away, and cooled in a drafty area. 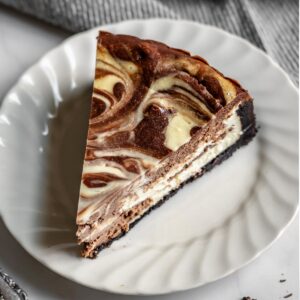 Be sure the cream cheese, eggs, and sour cream are at true room temperature before beginning. I like to take mine out about 6 hours prior to making the cheesecake. Any cold ingredients will lead to a lumpy batter. Crust: be sure to line the pan - watch how to do this. Then, work the crust up the sides first before working it into the corners and bottom. Use a ⅓ cup dry measuring cup to do this. Be patient and work on the lowest speed during the cheesecake batter process. A high speed can whip too much air into the batter and cause the cheesecake to crack during the baking process. Storage: cover the cheesecake and refrigerate for one week. Eat from cold. Freezing: wrap the cheesecake or individual slices in plastic wrap, then aluminum foil, and place them into a zip-top bag. Freeze for three months. Unwrap completely and thaw uncovered in the fridge before enjoying.