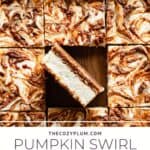 Creamy, dense New York style cheesecake is swirled with a spiced pumpkin mixture and baked on a gingersnap base. Quicker and easier than normal cheesecake, these Pumpkin Swirl Cheesecake Bars are the perfect fall treat.

Sometimes you want cheesecake, but you don't want the hassle of the springform pan and long bake time. That's why I love a real simple cheesecake bar! This is a fall version with pure pumpkin puree and warm spices swirled into the cheesecake batter. They're SO creamy and tangy.

For extra punch, these easy Pumpkin Swirl Cheesecake Bars have a gingersnap crust. They get slightly caramelized when baked from the sugar already in cookies and is slightly crunchier than a graham cracker crust.

If you want other pumpkin items, try my Pumpkin Chai Tiramisu, Pumpkin Pie Crumble Bars, or Pumpkin Spice Soft Pretzels! They're all pretty different depending on what you're looking for, but equally as delicious.

Here are some of the key ingredients - note, these are not all ingredients (the rest are considered staple items).

You will need a food processor of high speed blender, in addition to a stand mixer. You can do this with a handheld mixer if that's all you have, but be very careful not to whip for too long, as a hand mixer's low speed is much higher than a stand mixer's low speed. Whipping too much air into a cheesecake batter can cause it to crack and bake unevenly.

How to make the Pumpkin Swirl Cheesecake Bars

Add in the sugar, salt and melted butter and pulse a few times to combine and until all crumbs are moistened. Press the crumbs in the bottom of a parchment lined 8x8" pan. Watch this quick video to see how to easily line your pan. Hot tip: the best tools for this job are a ⅓ cup measuring cup and an offset spatula.

STEP 2: Combine the pumpkin, sugar, and spices in a bowl until mixed. I will acknowledge that the pumpkin is slightly chunky so it makes it more difficult to swirl into the cheesecake, but I like the maximum pumpkin flavor. If you'd like to make this step easier/more visually appealing, you can add 1-2 tablespoons of heavy cream to loosen it up. Transfer the mixture to a piping bag or tip top bag and set aside.

STEP 3: Add the softened cream cheese to the bowl of a stand mixer fitted with the paddle attachment and mix on low to cream. Add the sugar and mix on low again, then scrape down the sides.

With the mixer running on low, add one egg until fully incorporated, then the other. Scrape the sides once more, then add the sour cream and vanilla and mix until combined.

Pour the batter on top of the crust, spread it out, and gently tap on the counter to remove any air bubbles.

How to swirl pumpkin cheesecake

STEP 4: Snip a small corner off of the piping bag and swirl around the top of the cheesecake. Then, use a butter knife to swirl it in and throughout the cheesecake.

Pull the knife up and down slightly as you swirl. This helps to incorporate the batters together.

STEP 5: Bake the Pumpkin Swirl Cheesecake Bars for 35-40 minutes or until set and there is a still a slight jiggle in the center (not sloshy, though). Some areas may be puffed up and cracked around the pumpkin, but it will fall and settle as it cools. Remove the bars to a wire rack to cool for one hour, then into the fridge uncovered for at least 3 hours.

To get perfectly clean slices, Press down the knife to the bottom and pull towards yourself to remove (don't lift). Also, clean the knife off under hot water and wipe off in between each cut.

Store the bars in the fridge for up to 5 days, uncovered.

To freeze, wrap either the whole slab of bars or individual squares tightly in plastic wrap and place in a ziptop bag or Tupperware. Freeze for up to two months. To thaw, unwrap, place on a plate, and thaw in the fridge, then enjoy!

Do I have to use room temperature ingredients?

Yes! Your cream cheese, eggs and sour cream all need to be at room temperature (if not even further along). Any touch of cold in a cream cheese batter can create lumps, which is never a good thing.

What if I can't find gingersnaps?

No problem, you can use the same amount in of graham crackers. Add a ½ teaspoon of ground ginger if you want to slightly replicate the ginger flavor.

Other recipes to try

Store uncovered in the fridge for up to 5 days. It's very important to use room temperature ingredients for cheesecake layer or else they won’t combine properly and you'll have a lumpy batter. Don't increase your mixer speed past medium low. Incorporating too much air can make your cheesecake crack. Run a knife under hot water and wipe off completely before each cut to get very clean cuts.