The BEST fudgy chocolate cherry brownies made completely from scratch are better than box mix and couldn't be easier to make. The cherries and juice melt into the brownies to produce an extra moist, chewy brownie.

There's something so satisfying about bars and brownies. They're one of my favorite baking categories, but this is actually my first brownie post because I really wanted to nail a perfect brownie recipe from scratch. And by golly, we did it.

These chocolate cherry brownies (aka Black Forest brownies) are SO fudgy in the center, and perfectly chewy on the edges. They have that classic crackly brownie top (see Best Brownie Tips for more info) and would make the perfect Black Forest brownie sundae by adding a big scoop of ice cream.

The best part? They're so easy to make and bake up start to finish in one hour. Yes, you need to add a bit of cooling time to that...OR you can just dive right in with a spoon!

For more brownies, try these Ferrero Rocher Brownies. If you're looking for something a bit less chocolate, try my Chewy Browned Butter Blondies. They have all the fudge factor with a bit of chocolate added in.

Before beginning, thaw the frozen cherries completely and gently squeeze them to get rid of some of the excess liquid. Then, give them a very rough chop, mostly just having large cherries.

If using the cherries directly from frozen, note that the baking time will increase due to the thawing of cherries in the oven. I recommend thawing first.

STEP 1: Prepare an 8x8 inch pan with parchment paper and preheat the oven to 350℉/177℃. Sift together the flour and cocoa powder and set aside.

STEP 2: Whisk together the melted butter, oil, and both sugars in a large bowl until completely combined.

STEP 3: Add the eggs and whisk vigorously for one minute. Set a timer! Your arm should be burning by the end of it.

STEP 4: Add the sifted dry ingredients and use a rubber spatula to gently fold it together.

STEP 5: Throw in the chocolate and cherries and fold again to combine and evenly disperse. Then, pour into the prepared pan.

STEP 6: Bake the chocolate cherry brownies for 40-50 minutes. The center should be set and slightly jiggly, but not sloshy at all. The brownies will continue cooking and setting as they cool. Remove to a wire rack to cool for at least one hour, especially if you want clean cuts!

Brownies are made for mix-ins and variations! I'll provide a few ideas of how you can mix it up.

Store the brownies covered with foil at room temperature for 5 days. Alternatively, you can store them in the fridge for one week.

To freeze the brownies, wrap them completely in plastic wrap, then foil, and transfer to a sealed container. Freeze the chocolate cherry brownies for two months. Completely unwrap and thaw at room temperature before enjoying.

What is the secret to chewy, fudgy brownies?

There are a couple factors that contribute to ultra fudgy brownies! First, is using enough sugar paired with the addition of fat (oil, butter, egg yolks, etc). Sugar is hygroscopic, meaning it absorbs and holds liquid. This means that the sugar holds the oil, keeping the brownies moist the entire way through baking.

Second, is bake time. A perfect bake time is key to fudgy brownies. Over baking leads to cakey brownies rather than chewy brownies, so keep an eye on the time and don't be tempted to over bake.

Should brownies be gooey?

This is a personal preference. Some folks like gooey brownies that are slightly under baked, and others like brownies that are baked quite a bit longer to produce a cakey texture. The amount of flour used also contributes to how gooey the brownies will be...more flour equals more cakey!

Brownies can certainly be gooey, you just want to be sure they're baked enough that they're set and not sloshy in the center.

What kind of chocolate is best for brownies?

This is also a personal preference, but I prefer a semi-sweet chocolate for chips or around 60-70% cacao for chocolate bars. Milk chocolate just doesn't produce the same depth of flavor (and color) many seek in a brownie, and is a bit too sweet, as well.

For the cocoa powder, it's best to use dutch-processed or black cocoa rather than natural cocoa powder.

Yes, definitely! Note that bake time will decrease with a larger pan size, and the brownies will be slightly thinner. Start checking for doneness at the 25-minute mark to be safe. 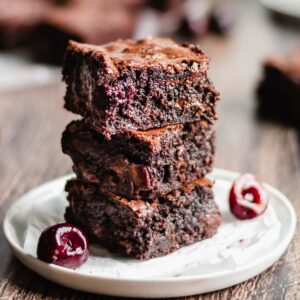 Store the brownies, covered with foil and at room temperature for up to one week. Fresh or frozen cherries (pitted) can be used. For frozen, thaw completely and lightly squeeze out some of the excess juice. They should be as close to room temperature as possible for effective bake time. For the best cutting results, completely rinse and dry the knife blade in between each cut. If using a 9x9-inch pan, baking time will be reduced. Begin checking for doneness at the 25-minute mark.