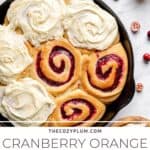 Soft and fluffy Cranberry Orange Rolls filled with sweet cinnamon cranberry filling to keep the rolls gooey and delicious. Add on a slather of tangy orange cream cheese frosting for the perfect twist on a breakfast classic!
Posted: 12/6/2020; Republished 11/24/2021

These are the most soft and fluffy sweet breakfast rolls you could imagine. Lightly flavored with orange zest, the dough gets filled with a sweet and lightly tart cranberry puree that keeps the rolls extra moist.

The cream cheese frosting is mixed with orange zest and a touch of orange juice, which pairs perfectly with the cranberry. It's a unique take on a classic fluffy cinnamon roll!

While you don't need a stand mixer for this recipe, it's much easier if you do have it. You'll need the dough hook attachment for the dough, and the paddle attachment for the cream cheese frosting. You'll also need an immersion blender (or food processor or blender) to puree the cranberry filling, and a rolling pin to roll out the dough.

Finally, you can either put all of the rolls in a 13x9" casserole dish, or split them up into other dishes like a cast iron skillet and 9" cake pan. Just be sure your rolls will have a bit of room to spread during the second rise.

It's important to measure your flour correctly when making the dough. Too much flour can make the rolls stogy and dense. If you don't have a digital kitchen scale, watch how I measure my flour with cups.

STEP 1: Start by activating the active dry yeast. Add 110℉/43℃ milk, 1 tablespoon granulated sugar, and the yeast to the bowl of your stand mixer. Allow it to stand for about 5 minutes or until the yeast has become foamy all over the top.

If this does not occur, your yeast may be dead or your milk was not at the correct temperature to activate the yeast. At this point, you'll need to start again with a fresh pack.

STEP 2: Add the whisked eggs, melted butter, remaining sugar, vanilla, and orange zest to the milk and yeast and mix on low to combine (you're using the dough hook right now). Then, add in the 4.5 cups (540g) of flour and start by mixing on low to bring it together.

Raise the mixer speed to medium and allow the dough to work. It will be very sticky and loose at first, but after about 5 minutes, it will start to pull off the sides and become more smooth. It's ok if some of the dough still sticks to the bottom, but it should no longer stick to the sides when it's ready.

If after 5 minutes the dough is still sticking to the sides, add 1 tablespoon of flour at a time until it releases itself.

STEP 3: Turn the dough out onto a lightly floured surface and knead the dough for another 3-5 minutes. If it starts to stick to the counter, add another light dusting of flour. You may need to use up to ½ cup (30g) more flour.

By this point, the dough will be smooth and supple. If you poke your finger into it, it will leave an indent that very slowly starts to fill back in.

Grease a large bowl and place the dough inside. Cover with plastic wrap and move to a warm place to rise and double in size. This will be different in every kitchen, anywhere from 30 minutes to 1.5 hours.

Pro tip: Take a picture of the dough as soon as you start the resting process. That way, you can refer back to figure out how much your dough has actually risen.

STEP 4: While the dough rises, make the cranberry filling by adding the fresh cranberries, brown sugar, cinnamon and a juiced orange to a medium saucepan and turn to medium heat.

Once the mixture starts bubbling, use the back of a wooden spoon or a rubber spatula to help break down the cranberries.

Once mostly broken down, use an immersion blender (or transfer the mixture to a blender or food processor) to puree completely. Add the ¼ cup water, stir, and allow to simmer for another one to two minutes.

Transfer the mixture to a heatproof bowl and transfer to the fridge to cool completely (I like to stir mine every 5 minutes or so to help it along).

STEP 5: Once the dough has doubled in size, punch down the dough (yes, actually) to remove the air, and turn it out onto a very lightly floured counter.

Use your hands to press the dough down into a rectangle shape, then use a floured rolling pin to roll out the dough into a 12" x 20" rectangle. It will be about ¼" thick. You'll want the long end to be facing your body.

STEP 6: Add the fully cooled cranberry puree to the top of the dough and spread it around. I like to use an offset spatula for this. Leave the last inch on the long side (side away from your body) bare to aid in sealing, but go almost to the edges on the other 3 sides.

Starting from the long end closest to your body, start rolling in the middle, and move to the right side, then left side. Continue rolling as tightly and evenly as possible. Sometimes I even have to use my forearms to keep an even roll going!

Once you get to the end, pinch the edges into the dough to seal, and roll the entire log over so the seam side is down. At this point, use your hands to gently massage from the center outwards, then push in both sides - this helps to create an even log.

STEP 7: Using unflavored dental floss, slide it under one end of the roll, bring the string up, cross them over, and pull down to slice. Slice off a skinny piece on each edge and discard.

If you don't have dental floss, use a serrated knife to carefully saw back and forth through the dough, careful not to squish the dough down and squeeze the filling out.

Next, go to the middle of the roll and cut in half. Cut the halves in half, then cut those haves into thirds. This will leave you with 12 even rolls. Throughout the process, wipe your floss off with a paper towel to keep it clean. Transfer each slice to your baking dish as you go.

The cutting and transfer to the pan can get messy with the soft dough and filling. I suggest using a spatula to transfer the cut rolls to the baking pan.

STEP 8: Cover the rolls and pan lightly with plastic wrap (I like to reuse the wrap from the first round) and place in a warm area to rise for another 30 minutes or so. The rolls will have expanded and become puffy.

Remove from the oven and cool for about 15 minutes.

STEP 9: In a stand mixer fitted with the paddle attachment (or with a handheld mixer), cream the butter and cream cheese on medium speed until smooth, then add in the powdered sugar ½ cup at a time until combined.

Spread the frosting evenly over the warm rolls and serve.

Only frost the rolls you plan to eat. This way, you're able to easily reheat the unfrosted rolls and spread on the remaining frosting. Heating the already frosted rolls runs the risk of all of the frosting melting!

If you'd like to make the rolls ahead of time, you have two options:

1. After cutting the rolls, cover them tightly with plastic wrap and place them into the fridge. The next morning, remove the pan from the fridge and allow the rolls to rise in a warm area for 30 minutes, then remove the plastic and bake following the recipe instructions.

2. Go through with the whole recipe, but cut the bake time to 15 minutes to par bake the rolls. Allow the rolls to cool, then cover with foil and store at room temperature. Before serving, bake the rolls, uncovered until golden brown and completely warmed and cooked through.

To freeze, do so right after they've been cut and wrap them tightly in a pan. Before baking, allow them to thaw completely in the fridge, then place in a warm place to rise for 30 minutes before baking.

To reheat the baked rolls, lightly tent with foil and bake until warmed through. Spread on the cream cheese frosting while still hot or warm - especially if using the frosting straight from the fridge.

Can I use instant or rapid-rise yeast instead of active dry?

Yes. Reduce the amount to ¾ tablespoon and skip the step of activating the yeast in milk. Instead, add all of the ingredients together at once to the mixer. If using instant yeast, keep in mind your dough will rise more quickly, so keep an eye on it and move on to the next step once doubled in size.

Can the recipe be halved?

Yes, definitely. Simply cut all ingredients quantities in half and follow the same instructions. Keep in mind when you roll out the dough, those dimensions will also be halved.

Can I make cinnamon roll dough by hand?

Yes, you definitely can. Just be prepared for the dough process to take a bit longer and you'll have to use some elbow grease!

Follow the same recipe steps through adding all of the ingredients to the bowl up until the mixing starts. Rather than using a mixer to bring everything together, use a wooden spoon until it becomes too tough to mix.

Turn the dough out onto a floured surface and knead, adding more flour as needed until the dough becomes a smooth and supple ball. The dough will be sticky for quite some time as you knead, but be patient. As the gluten forms, the stickiness will reduce.

Other recipes to try 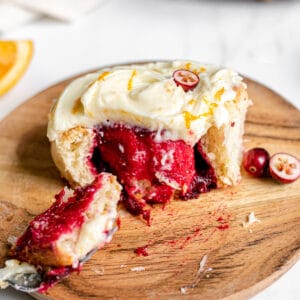