What is Tres Leches Cake?

Tres Leches Cake, or "three milks cake" is of Latin American origin -- and most countries have their own version! Traditionally, the three milks used for soaking are sweetened condensed milk, evaporated milk, and heavy cream.

This light and airy sponge cake is soaked with the three milks overnight, and turns into a gloriously soft, luscious treat. While the concern for most people is that it will be soggy, that's actually not the case at all! The sponge cake (similar to angel food cake consistency) absorbs everything perfectly, while also keeping its structure. I’m here to assure you that it is not mushy by any means and the texture is fabulous.

Finally, this cake is meant to be eaten cold. Again, may feel a bit unusual with so many recipes telling you to let your baked goods come to temperature before enjoying. However, this is part of what I love best about this cake - it is SO refreshing and a nice change up from the usual routine.

For this specific recipe, I used sweetened condensed coconut milk and evaporated coconut milk from Nature's Greatest Foods. They were so generous to allow me to sample some of their product, and I LOVED it.

If you aren't able to get your hands on the coconut products, you can also use normal sweetened condensed milk and evaporated milk and simply add 1 - 1.5 teaspoons of coconut extract, instead. It will taste absolutely delish!

While this is a very simple cake batter to throw together, the step that catches people up is properly whipping the egg whites and folding them into the cake batter correctly.

The egg whites are properly whipped when the beaters leave tracks in the egg whites and when the bowl can be flipped upside down without them sliding or falling out. Be careful if you choose to test this way just in case they're not quite ready 😉 When you remove your whisk and hold it upright, the whites will have a stiff peak that doesn't fall over.

Once the egg whites are whipped to stiff peaks, add about half of the egg whites to the batter, careful not to stir and deflate the batter. Do this in a “J” motion, cutting down the middle of your bowl, scraping the bottom, and coming back up on the sides. Once the first half of the whites are incorporated, do the same with the other half until there are no longer ribbons of the whites visible. The batter will be thick and fluffy, it should not be easily "pourable."

After baking, the cupcakes will look brown and shriveled and not exactly... appetizing. The milks and toppings will take care of this problem, so don't even worry!

Finally, you want to poke A LOT of holes into the cake. So many that it feels like too many - and makes sure you get the sides. This is what allows the milks to really absorb and is a key step in overall outcome!

Does Tres Leches Cake need to be refrigerated?

Yes. Because of the milk for soaking the cake and the whipped cream topping, this cake must be refrigerated. This cake is best eaten within three days, but can last up to five days before the structure deteriorates and whipped topping falls.

If you prefer to make this recipe into a 13x9" inch cake rather than cupcakes, simply follow my standard Tres Leches Cake recipe and make the proper substitutions and additions for the coconut flavor. 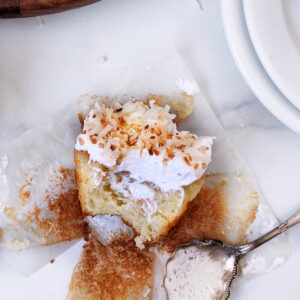 Store the cupcakes covered in the fridge for 3 days. **Tulip cupcake liners must be used. You cannot use standard cupcake liners for these cupcakes, as they require higher sides for the amount of rise that will occur. If you cannot find or don't want to purchase these, you can make this into a cake, instead.  If you would prefer to make this into a 13x9" cake, follow my Tres Leches Cake recipe and swap for the coconut product options listed in this recipe *If you can't find the coconut milk products, simply use one can of normal evaporated milk, one can normal sweetened condensed milk and add 1 - 1 ½ teaspoon of coconut extract to the milk mixture.