This easy and delicious Blueberry Cheesecake No-Churn Ice Cream is sure to be a hit during the summer months. Packed with flavor, each bite gives you creamy vanilla ice cream, cheesecake, sweet and jammy blueberries and graham cracker pieces!

How to make no-churn ice cream at home

Who says you need an ice cream machine to enjoy homemade ice cream?! No-churn ice cream couldn't be easier - you'll be wondering why it's taken you so long to try it! The base of this ice cream is made by whipping heavy whipping cream to soft peaks, then drizzling in vanilla and sweetened condensed milk until semi-firm peaks form. It then gets frozen, and that's it!

This Blueberry Cheesecake No-Churn Ice Cream has pieces of no-bake cheesecake, a homemade blueberry pie filling, and crushed graham crackers. You can use the vanilla ice cream base in this recipe to make any variation of ice cream you'd like. You won't regret it, scouts promise!

You'll need to start off by throwing together the cheesecake layer, which will need to go into the freezer for a couple of hours. Simply buzz together (in the food processor) the cream cheese (cold!), sugar, heavy whipping cream, vanilla, and lemon juice until light and fluffy.

Add the cheesecake to a loaf pan or shallow dish lined with plastic wrap for easy removal. Spread evenly and freeze for 1-2 hours or until mostly firm. It's ok if it's still a bit soft, as it will finish freezing with the ice cream.

Cut into bite-sized chunks once ready to assemble the ice cream.

Cook for about 30 seconds until the mixture thickens and resembles blueberry pie filling from a can. Remove to a bowl and place in the fridge to chill.

Not a fan of blueberries? No fear! You can also follow the same measurements for strawberries, cherries or peaches to change it up. In a pinch, you can purchase a can of pie filling, but I suggest making your own since it's so quick!

Grab a standard sized loaf pan and add half of the ice cream to the pan and spread it evenly. Add half of the blueberry filling, half of the pieces of cheesecake, and half of the graham cracker pieces evenly over the top.

Add the remaining ice cream and smooth it out, then follow the same steps as above. This time, swirling the blueberry filling throughout the top of the ice cream (before adding the cheesecake and grahams) to make it beautiful!

Storing and eating the no churn ice cream

Once assembled, cover the pan with plastic wrap and freeze for at least four hours. When ready to eat, allowing the ice cream to sit out at room temperature for 15 minutes. Because no-churn ice cream doesn't have a custard base, it will feel hard and icy straight from the freezer. Allow it to warm up slightly turns it into a perfectly creamy and irresistible ice cream treat!

Store the ice cream in a tightly sealed container, with a layer of plastic wrap in between the vessel and lid. This will keep for two weeks. 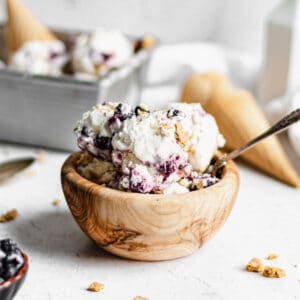 Place a dish towel over the stand mixer - the heavy cream will go rogue while whipping. Allow the ice cream to sit at room temperature for 15 minutes before enjoying. Don't worry, it won't melt. No churn needs a bit of time to soften up!