This sweet, simple, creamy no-churn Blackberry Chip Ice Cream is just what you need for a sweet summer treat! Maximum flavor for minimal effort and no ice cream machine needed!

Ice cream without a machine (no-churn)

This homemade blackberry chip ice cream doesn't need a machine, which also means it's a recipe with no eggs or custard needed.

The benefit to this is that you don't have to have a bulky piece of equipment occupying space that rarely gets used.

The simplest way to make no-churn ice cream is to combine sweetened condensed milk and whipped heavy cream by folding it together. This is a standard vanilla ice cream base, but the possibilities for flavors are endless!

Some say that the sweetened condensed milk is too overpowering, but I find that you don't even taste the milk flavor at all when flavors are added.

The biggest difference between the two versions of ice cream is that churned ice cream is made with a custard base, which contains eggs, sugar and milk/cream. It then gets slowly churned in an ice cream machine until smooth and creamy.

In no-churn ice cream, you skip the custard step and the churning step and simply combine sweetened condensed milk with whipped heavy cream.

You gently fold the ingredients together so the whipped cream stays fluffy which helps to replicate the creamy texture that the churning provides.

Add the puree to a saucepan with the sugar and cook over medium heat until the puree reduces by half. Stir it every minute or so (scraping down the sides, too). I recommend using a rubber spatula for this.

This can take anywhere from 10-20 minutes. The reduction is getting close to where you want it to be when the mixture is no longer foamy, which is when you should start checking.

You'll know it's done when you lift the spatula and the puree doesn't immediately slide off. You'll also be able to swipe your finger through the puree on the spatula and it doesn't run back together at all. It will get "sticky" more like a jam. Cool the puree completely.

Once cool, combine the sweetened condensed milk with about ⅔ of the blackberry puree. You'll need to save a bit to swirl into the ice cream, and add the vanilla. Whip the heavy whipping cream until stiff peaks form.

If you're unsure of your folding technique, check out my Proper Folding Technique video.

The ice cream will become considerably lighter in color once all the whipped cream is added. Finally, fold in the mini chocolate chips.

Cover the ice cream in plastic wrap AND foil and freeze for at least 6 hours. It's very important to allow the ice cream to stand at room temperature for 15 minutes before serving or else it will feel hard and icy. This is the way of no-churn, it needs a bit of time to soften and get creamy! 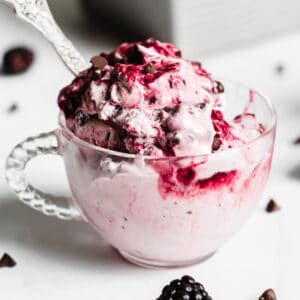 Allow the ice cream to sit at room temperature for 15 minutes before enjoying. Don’t worry, it won’t melt. No churn needs a bit of time to soften up! Store the ice cream in a covered container (or with plastic wrap and foil) for up to two weeks.

Find my best recommendations for "must haves" and "nice to haves"

Another hot day over here! Could use a few scoops

CCCs are always a good idea. Especially when they

Picked strawberries from my parents garden this mo